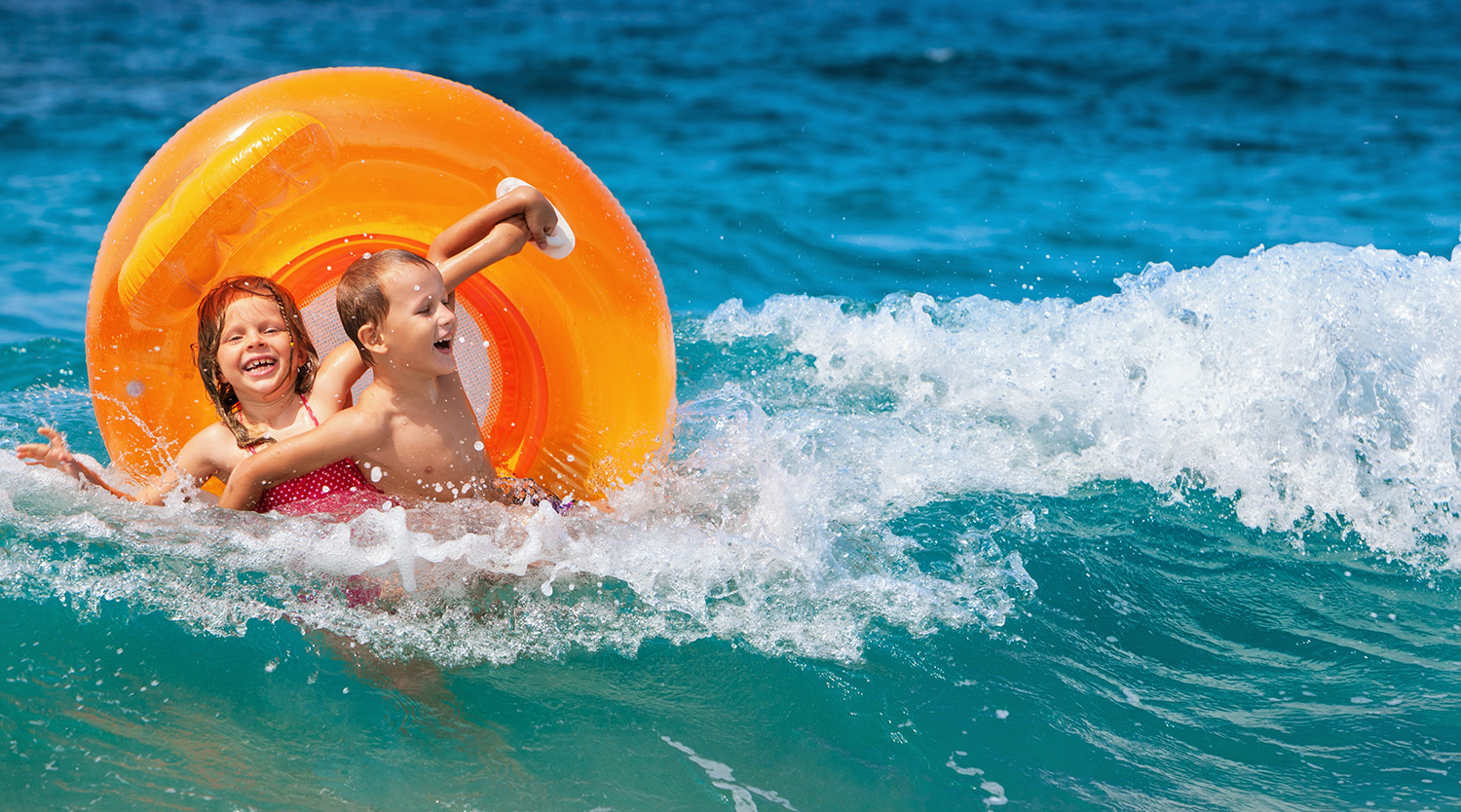 When people talk about people, places, or things that are alike in some ways but uniquely different in others, they often say, "it's like comparing apples to oranges." Well, that certainly applies when trying to compare Destin to "Orange" Beach!

They are both beach towns on the Gulf of Mexico and tourist destinations, but as many of our Ocean Reef Resorts guests will tell you, that's where the similarities end. Destin is the "apple of their eye" since it is internationally renowned for having some of the most beautiful beaches in the world. Each beachside destination has restaurants, bars, retail establishments, family amusements, and golf courses*.

*Destin has eight eighteen-hole championship golf courses, and Orange Beach has one nine-hole course billed as a Golf Center.

Destin, Florida, is located approximately 75 miles east of Orange Beach, Alabama. Destin is centered on the famed Emerald Coast, which gets its name from the jewel-toned waters found in this part of the gulf that extends from Panama City Beach to Pensacola. The pure white quartz crystal beach shimmers brightly in the sun. At the same time, the glittering gulf water displays dazzling colors ranging from emerald green to peridot with hints of turquoise. Many of the privileged visitors come to Destin from metropolitan Atlanta, and Dallas/Fort Worth, and Nashville. Orange Beach is located in lower Alabama southeast of Mobile and is mostly frequented by residents from that state. 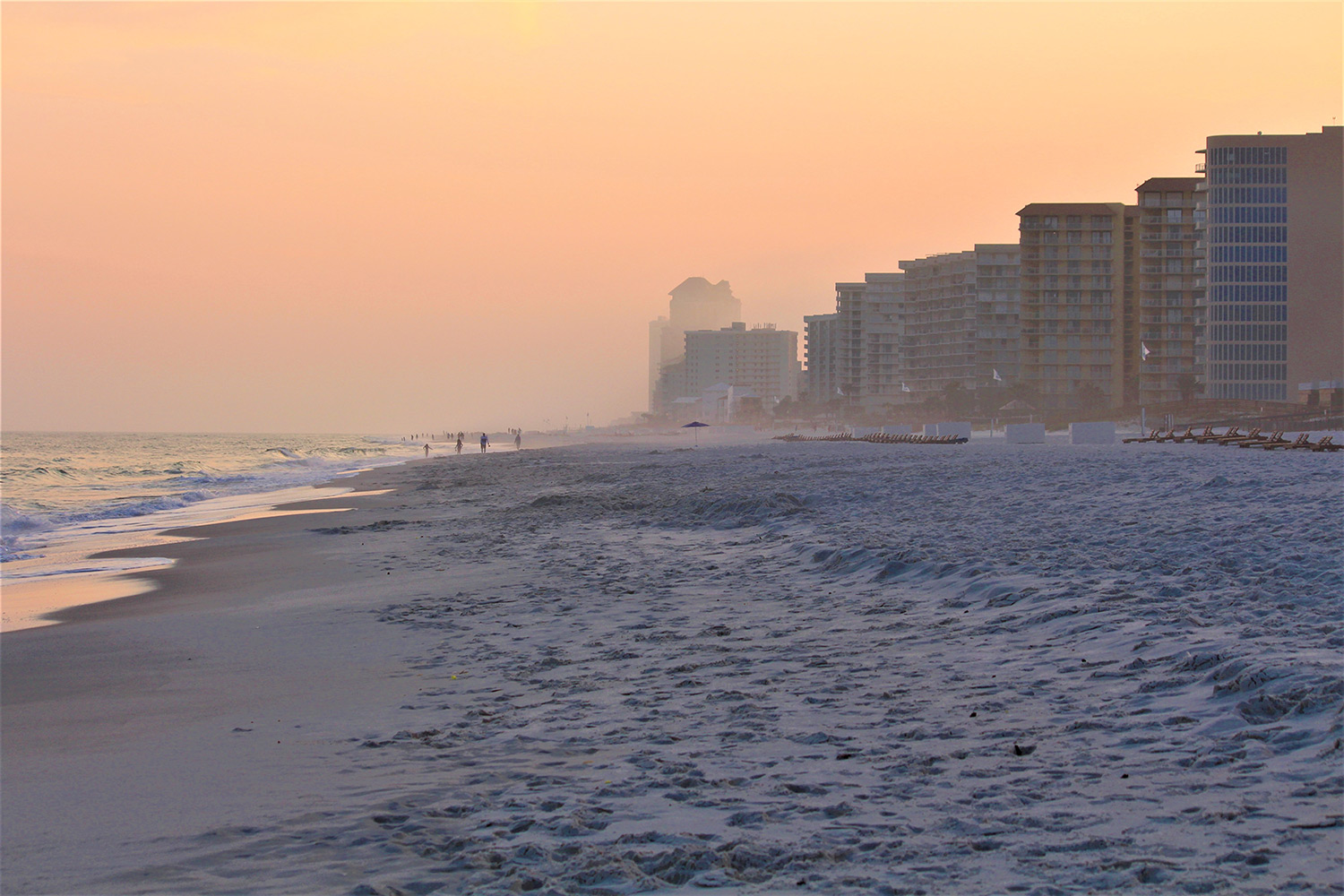 Orange Beach is much smaller than Destin and is mostly located on a narrow strip of land a short distance south of the Wolf Bay intracoastal canal on a sandbar-like coastal barrier island. The rest of it borders the canal towards the north. The beachside is extensively developed due to its limited geographical size with mostly high rise condominiums right beside one another along the gulf. Most of them look very much the same, and there are very few open areas available for the rest of the public. However, nearby Gulf Shores State Beach Park does provide some gulf views and offers public access. The shoreline at Orange Beach is indeed whiter than those on the Atlantic coast, and the water does have a slight greenish hue. However, it does not compare favorably to Destin since large portions of its sugary shore have received acclaimed Blue Wave Beach status, which is the nation's highest designation for pristine natural beauty and cleanliness. The gulf waters in Destin are usually as clear as a swimming pool because it is far away from flowing tributaries. Orange Beach is near industrialized Mobile Bay and closer to the Mississippi River, which tans the white beach and often perpetuates a somewhat brackish hue in the water. 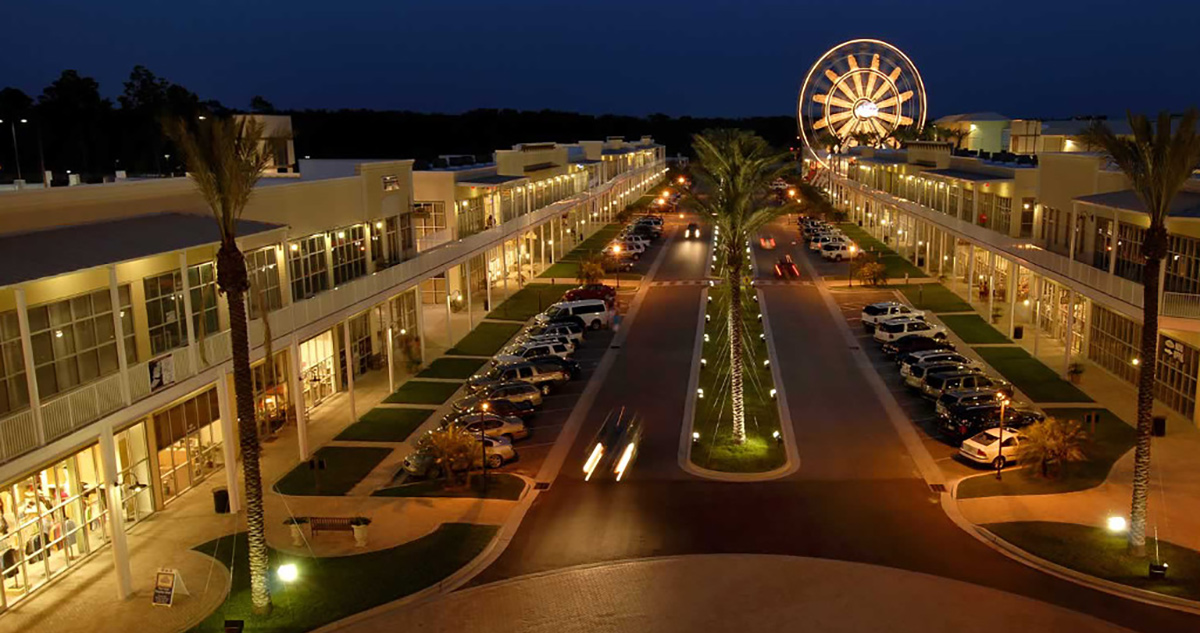 Top attractions in Orange Beach include a small marina, a place called Adventure Island, and The Wharf. It also has about 20 restaurants and bars, most of which are devoted to seafood. The Orange Beach Marina offers water recreation rentals, fishing excursions, dolphin sightseeing cruises, and parasailing. Adventure Island features Miniature Golf, a Go-Kart Track, Kiddie Paddle Boats, and an Arcade Game Room that includes Laser Tag. The Wharf is a little village of its own located on the interior intracoastal canal and is the number one happening spot. It has some restaurants, bars, grills, a coffee house, specialty shops, a state of the art AMC movie theater, a towering 112' tall Ferris wheel, its own miniature golf course, and a zip line. A large amphitheater there draws big crowds when it hosts top touring bands during the vacation season. 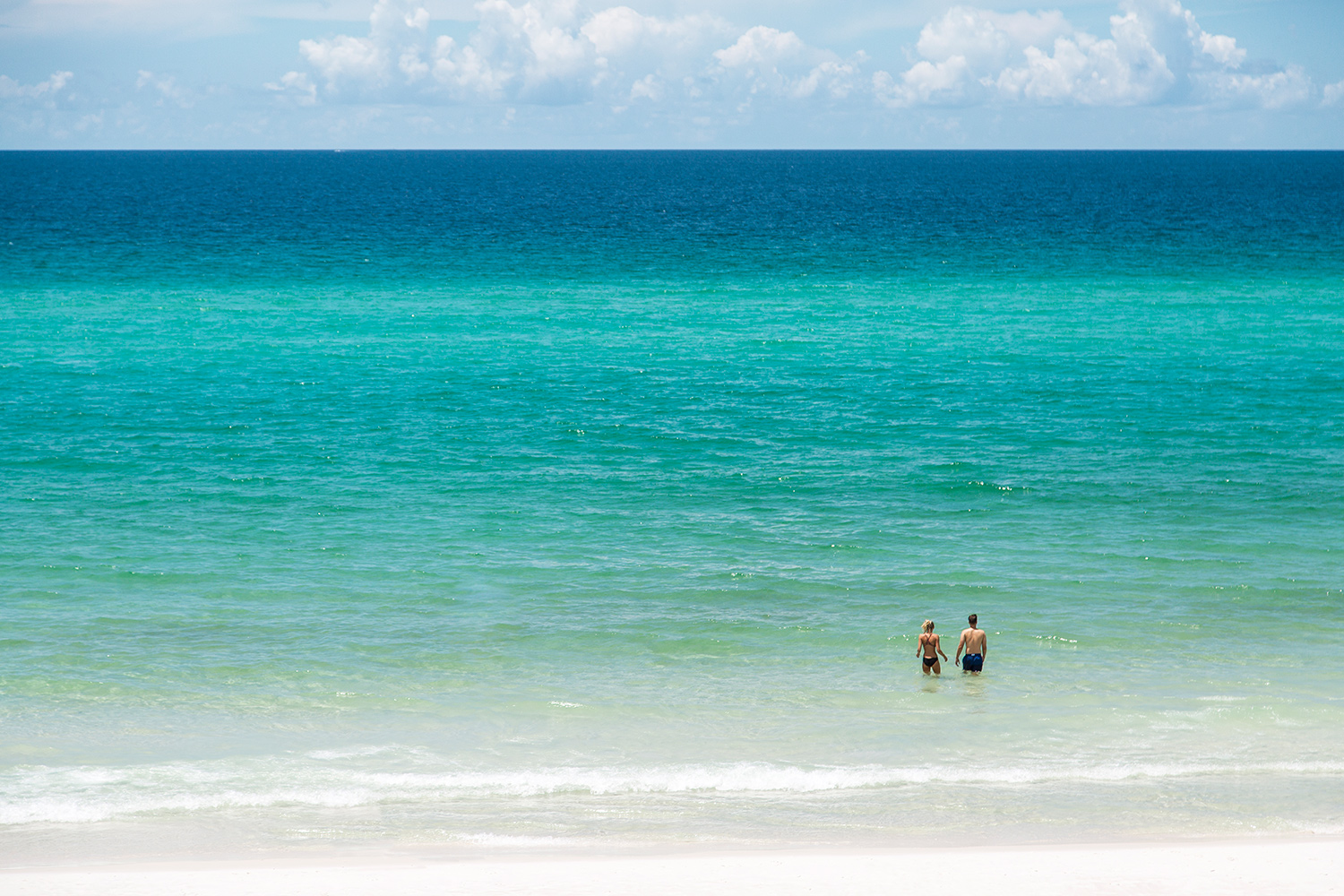 Destin is located in the northwestern panhandle of Florida between the wide expanse of Choctawhatchee Bay and the open gulf. It is on a broad peninsula that resembles an offshore island three to five miles off the mainland, almost completely surrounded by water. This "island" encompasses over eight square miles spanning across nine miles from east to west and one to three miles from north to south. It also includes Miramar Beach toward the east in Walton County, which is home to the world-class Sandestin Golf and Beach Resort as well as the idyllic beautifully planned picturesque coastal villages created along what is called Scenic 30A. There are almost half a dozen beach parks with easy public access in the area which provide stunning gulf views and are bordered by thousands of acres of gorgeous forest preserves that contain rare precious coastal dune lakes. This heavenly place has always been and continues to be considered a part of Destin.

Besides the bright white beach, Destin's top attractions include an abundant assortment of waterfront restaurants, friendly bars, specialty shops, and amusements. Many of them are located at HarborWalk Village on Destin's large marina that is home to the largest private charter fishing fleet in North America. Destin actually started becoming a tourist destination in the late 1800s and is known as "The World's Luckiest Fishing Village" since it has the closest proximity to deep-sea fishing on the entire gulf. Ocean Reef Resorts guests enjoy having access to a variety of water sport rentals with special discounts at HarborWalk Village through our complimentary Reef Rewards program as well as sunset dinner cruises and dolphin sightseeing adventures. Jet skis, paddleboards, kayaks, rafts, and fishing boats are rented for excursions out into shallow water at places like Crab Island, which features frolicsome boat parties. Reduced rates are also available to our guests at one of the largest water parks in Florida known as Big Kahuna's, which also features a giant tropically inspired miniature golf course as well as three championship eighteen hole courses located at Seascape, Emerald Bay and Windswept Dunes. 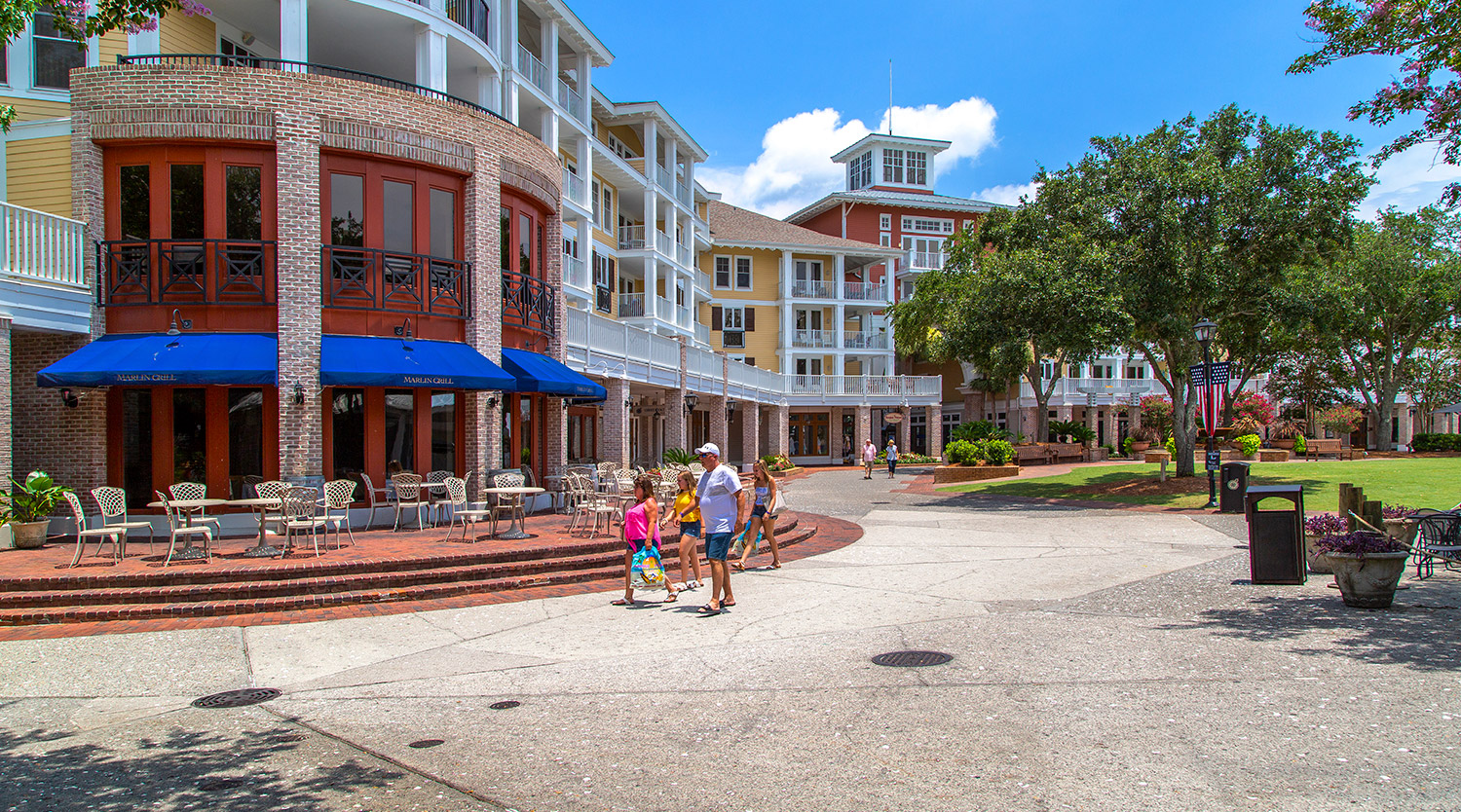 Another popular Destin destination includes the enchanting New Orleans French Quarter inspired Village of Baytowne Wharf at Sandestin and coastal villages along Scenic 30A that feature restaurants, casual bars, specialty shops, free outdoor concerts, sensational seasonal festivals and amusements for all ages. Over 100 restaurants dot the coast here featuring Barbeque, Cajun, Caribbean, French, Greek, Italian, Mediterranean, Mexican, Seafood, and Southern cuisine. Many have received impressive culinary awards. The popular Disneyesque retail complex of Destin Commons provides some of these dining establishments, bars, a wide array of specialty shops, fine clothing boutiques, and an AMC movie theater. Destin visitors usually also make it a point to go bargain shopping at the Silver Sands Premium Outlets in Miramar Beach since it is one of the largest discount designer centers in the nation with over 100 world class stores.

Read more: Complete Guide to the Village of Baytowne Wharf 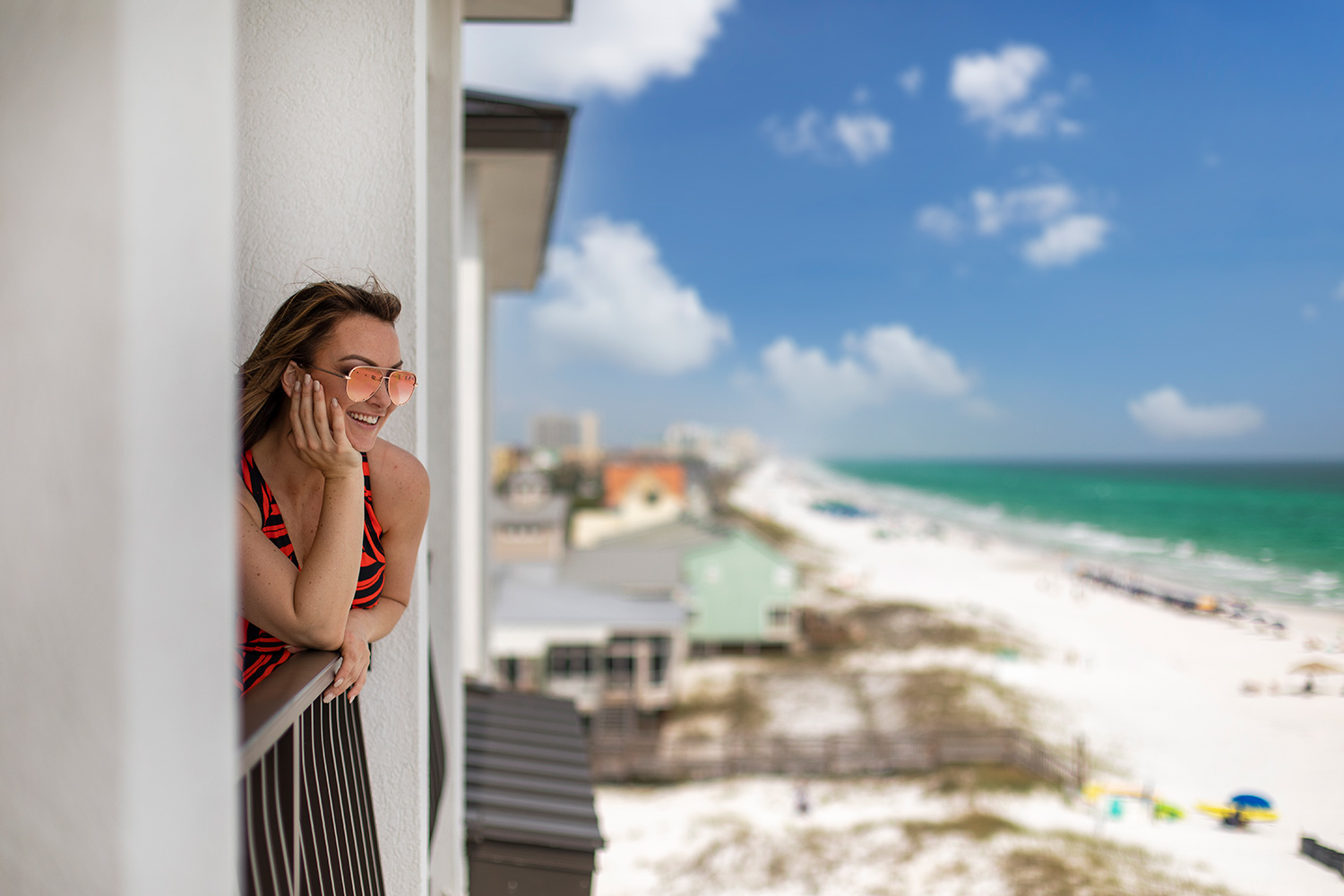 Many generations have always picked the wonderfully blessed world of Destin as their favorite place to go for a beach vacation and would never consider anyplace else. Take a look at our acclaimed Destin vacation rentals available, and you'll see why. We have been providing distinctive hospitable rental properties to our highly esteemed appreciative guests for almost forty years. They include large gulf front villas for big beach reunions, cozy cottages for intimate family getaways along with luxurious condominiums, and exclusive resort stays right beside the beautiful beach. Our user-friendly website provides detailed descriptions, multiple vivid images of each property, aerial satellite views of individual locations, seasonal rental rates, and calendar dates showing current availability for reservations. Have fun picking your own favorite beach home away from home and act now to start creating magical memories in Destin that will last a lifetime! 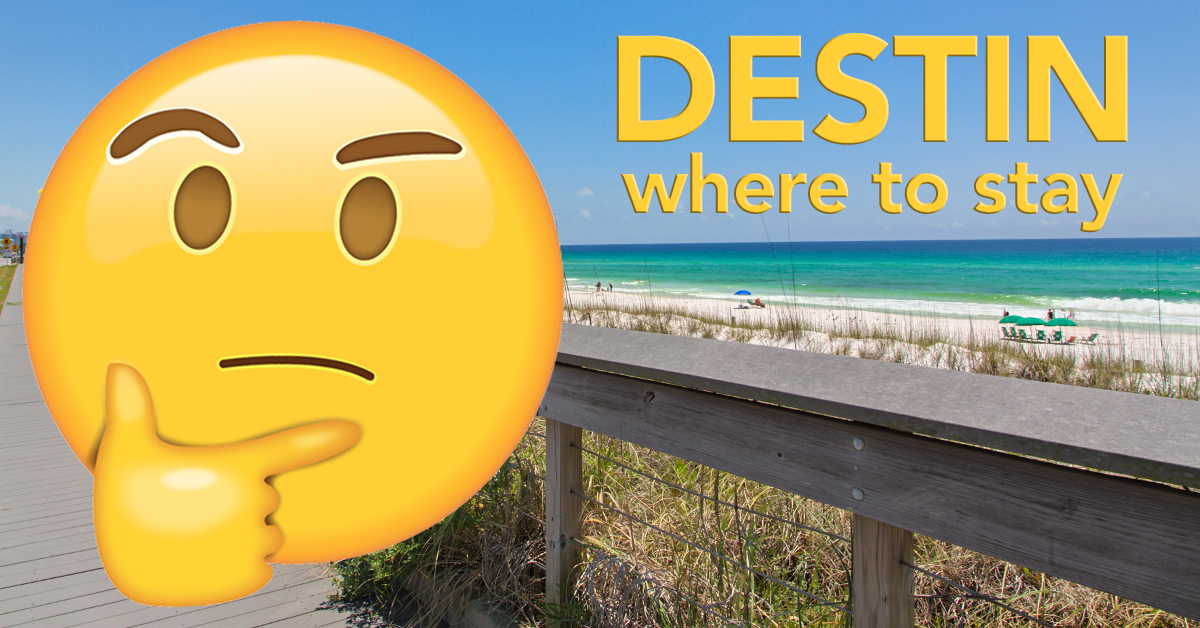 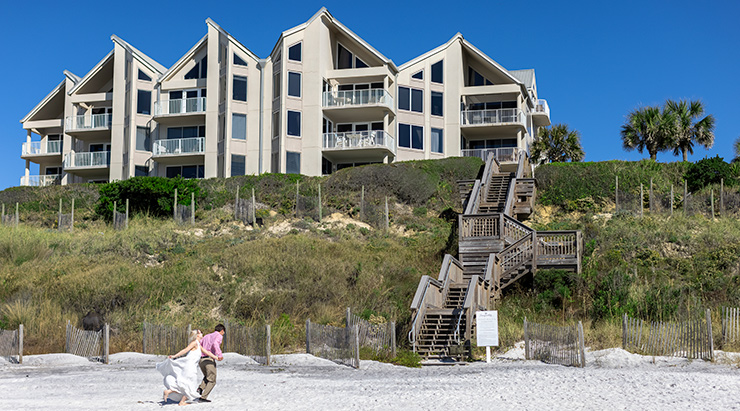 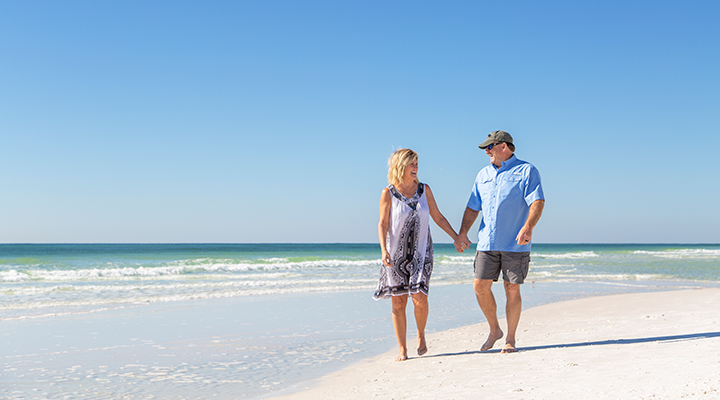 POPULAR TOPICS:
Destin Pet Friendly 30A Grayton Beach 2022
FAVORITE ARTICLES:
Which part of Destin should we stay in?
It's all the same, isn't it? Well, yes and no.
10 Ground Floor Beachfront Destin Condos
Walk out to paradise from these 1st floor vacation rentals!
Which beach has the clearest water in Florida?
Water Simply Cannot Be Any More Clear.

"Land Zen" is the whimsical name of this gorgeous, gracious vacation home that can sleep up to 12 fortunate beach-going guests. You will find your carefree "Zen" state of being at this premier location on "Lands" End Drive, right beside the sugary shore in Destin Pointe. This exclusively gated community of privileged residents and their guests is l 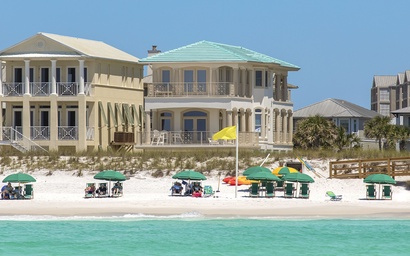 Land Zen
5 BR
4 BA
12 Guests
Home
Details
Orange Beach offers a great location in Crystal Beach, which places you within walking distance to the dazzling emerald hued waters of the gulf as well as near restaurants, shopping, lively bars and family amusements. The furnishings and amenities at this home seamlessly blend a contemporary modern look with comfortable country casual furnishings. 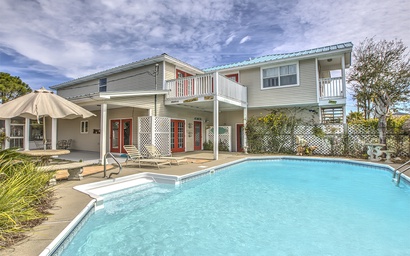 Orange Beach
4 BR
4 BA
12 Guests
Home
Details
This two-bedroom gulf-front condo at the Shoreline Towers condominium in Destin can sleep six beach-going guests comfortably. Located in one of the three bright white luxury towers, it is the original crown jewel of Holiday Isle. It faces the sugar-white "shoreline" with gorgeous gulf views from a balcony directly accessible from the open living ar 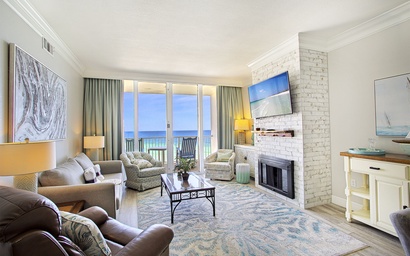