The Gulf of Mexico is very different from the Atlantic Ocean, primarily due to the color and makeup of the sand as well as the clarity, color and temperature of the water. Many of our Ocean Reef Resorts guests already know this, which is why they choose to vacation here year after year. Of course, when we mention the gulf in this comparison we are talking about this precious jewel famously known as the Emerald Coast. It extends beside Destin, Miramar Beach and the picture-perfect coastal villages along South Walton's Scenic 30A and all the way into Panama City Beach.

The wide ribbon of sugary shoreline here is acclaimed for having some of the whitest sand on Earth.  A few years ago a man from Chicago was renting a place at Sandestin while visiting a friend who had moved here.  As they walked down the long promenade to the beach his friend asked him where his sunglasses were. “I left them up in my room,” he said. His friend responded, “You’re going to need them” but was ignored. About halfway to the beach the visitor was completely blinded by the brilliance of the sunlight reflected off the sugar white sand and said: “this is as bright as the snow back at Vail when I go skiing in Colorado!” He quickly went back to his room and grabbed his sunglasses. Sunglasses here are not just a fashion accessory but a necessity! The reason for this blinding brilliance on sunny days is that the sand is composed of pure white quartz crystal.  During the Ice Age, chunks of quartz crystal were sheared off Appalachian mountaintops and washed down into the gulf by the Apalachicola River. Waves and tidal action over almost 12,000 years ground the quartz into a pure white powder of tiny crystals. This fine crystalline powder shimmers in the sunlight and doesn’t burn your feet since it reflects light. You may have noticed that many people shed their sandals at the end of beach walks before heading to the water’s edge. Besides the fact that the sands not hot even on the hottest day, people love its pristine powdery feel that is so fine it actually squeaks when you rub your foot across the surface. The Emerald Coast has received rave reviews over the years in magazines like Coastal Living and Southern Living. Southern Living magazine rated Destin as the #1 Best Place for a Family Beach Vacation. Professor Stephen Leatherman, aka “Dr. Beach” who writes for the Forbes Travel Guide, consistently rates the Emerald Coast on his Top Beach list nationwide.  Forbes Magazine named Grayton Beach as the Fourth Most Beautiful Beach in the nation for 2018 and Destin itself was rated as the Fourth Most Beautiful PLACE in America a few years ago after a national survey was conducted by the Good Morning America.

In contrast, the ocean beaches have sand comprised of gritty pulverized seashells mixed with small pebbles that are tan or brownish in color. This is due to sediment, which is common because of the amount of river runoff. And yes the sand does burn your feet on a hot day! The ocean usually has higher waves but surfers can often be seen around Destin when storms far off coast create big swells. Although the Atlantic generally has more seashells than the Emerald Coast, Destin seems to have just the right amount of small spiral and scalloped shaped shells in creams, tans or ebony colors along with a few sand dollars. Local Beach Stores sell all kinds of shells from everywhere else in case you want to take some larger ones home!

The composition of the sand also greatly influences the water color of the ocean and the gulf. The ocean generally has a dark almost murky green color, which is especially typical on the Atlantic east coast. Here along the aptly named Emerald Coast, the water resembles the tone of glittering jewels. The glowing green hues are created by chlorophyll which is seen as sunlight reflects through the natural microscopic plankton from the white sandy bottom and creates a magical luminescence.  The gorgeous array of color ranges from emerald green to peridot to aquamarine depending upon the water mixture and amount of sunlight. First-time visitors often gasp in delight when they first see the dazzling jeweled water.  Another big part of this glittering scenery is the clarity of the water, which is influenced by how much sediment flows in from mainland drainage. Many rivers flow directly into the Atlantic Ocean, but our sugary shore is protected since no waterways drain into the gulf nearby. The huge northern expanse of Choctawhatchee Bay is miles away from the mainland and serves as a giant filter for any sediment coming in from a few creeks and one small river on the other side. The only opening between the bay and gulf is at East Pass which interconnects at Destin’s Harbor. Crystal clear water continuously pours into the bay from the gulf every day. It becomes distilled when it returns to the Gulf since the brackish inland drainage has become naturally filtered by the big bay.  The only major rivers near our shores are the Apalachicola River 100 miles toward the east which flows into another large bay and the Mississippi 250 miles towards the west. The largest deposit of sediment flowing directly into the gulf comes from the Mississippi River, but fortunately the current carries the runoff counter clockwise towards Texas and away from our precious coast.  Surveys consistently rate The Emerald Coast in first place for having the clearest water in Florida. This esteemed recognition for clarity is not a surprise among visitors and locals but greatly treasured. The water along this coast is usually “swimming pool clear” unless we’re experiencing some occasional inclement weather.  A Blue Wave Beach award has been bestowed upon 26-miles of coastline in South Walton and it is the only place in the nation to have received such acclaim. This is the nation’s premier designation for cleanliness, water quality and natural beauty after extensive studies are conducted.

Another “perk” of the gulf compared to most of the ocean is the more temperate water temperature. The gulf is closer to the equator in a tropical environment and since it’s mostly enclosed, does not experience icy currents from the arctic north. The upper east coast of the Atlantic Ocean and entire Pacific coast is far colder. In fact, even during August, swimmers must brave the numbing waters for about five minutes until their bodies finally adjust. No problem with that here!

Well now you know how blessed you are to be gulf side. Enjoy finding your favorite Gulf Coast Vacation Rentals with Ocean Reef Resorts today!

Why Bogg Beach Bags are So Hot

Destin & 30A Charcuterie Board Delivery 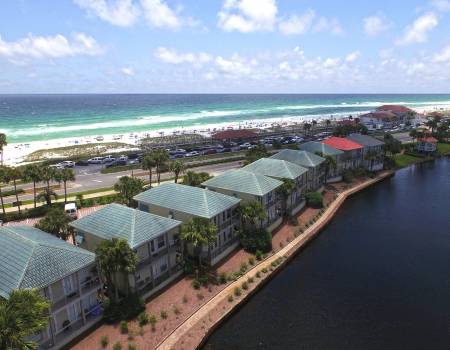